Arc Aberrants are a type of Aragami exclusive to God Eater 2 Rage Burst. They look like combinations of more common varieties of Aragami fused with God Arcs, which they use to either power up some attacks or to attack in completely different ways; whichever the case, these powers are lost if the God Arc parts are destroyed.

Story-wise, some of them are the result of The Spiral Tree devouring Friar, causing the Aragami inside to fuse with the Arcs stored in the fortress, whereas others are the result of Dr. Rachel Claudius's will being exerted to the Tree in order to create Aragami that are a suitable challenge for the members of Blood.

Magna Gawain's Shield parts cause timed explosions around themselves and the Aragami's legs, causing damage and knocking back any nearby God Eaters.

Ontovasara's Blast Gun part allows it to perform a powerful blast attack. It also works automatically, emitting damaging blasts to the position of attackers when the Aragami staggers.

Yaksha Tivra's Buster Blade claws add huge gouts of fire to all its claw attacks. In the case of its sweeping attack, the fire lingers for a short time and can even hit a God Eater several times. 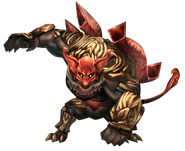 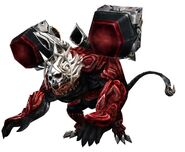 Rakshasa Kongou's Boost Hammer parts allow it to send damaging blasts to its immediate surroundings whenever downed or using an attack that leaves it vulnerable for a few seconds. It also allows it to "boost" some of its attacks, such as its slamming attack, which it now performs by jumping high into the air. 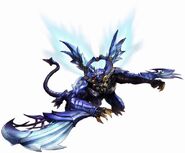 Caligula Xeno, mimicking Gilbert McLaine's Blood Art, can use a Charge Spear-like attack which increases its attack damage, as well as that of nearby Aragami. 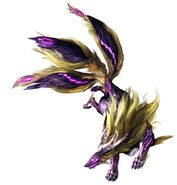 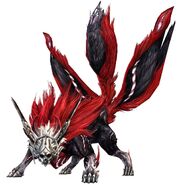 Mukuro Kyuubi's Short Blades allow it to perform a Rising Edge-like attack, and also change the properties of some of its attacks, which either deal damage when before they didn't, or deal multiple instances of damage. It also imitates Ciel Alençon's Blood Power, allowing it to detect and focus its attacks on God Eaters low on health.

Retrieved from "https://godeater.fandom.com/wiki/Arc_Aberrants?oldid=85656"
Community content is available under CC-BY-SA unless otherwise noted.