This article is a stub. You can help God Eater Wiki by expanding it.

Fenrir HQ, second-in-command of the elite unit "Eclipse".
With the captain's will, he uses his quick judgment and rigor to organize his units.
The commander's high qualities, his skills, and his honesty have been highly evaluated by the HQ leaders, and he has been called on to be the captain of another unit, but he refused.
In battles, he uses heavy God Arcs. 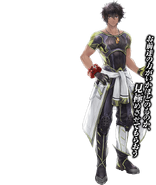