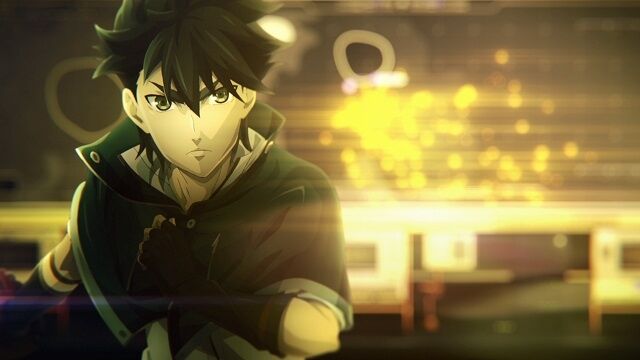 The episode opens with Lindow and Tsubaki examining one of the points where an Aragami guidance system has been placed, with Lindow stating that they should speed up the operation.  Tsubaki beckons Lindow to come with her, and the two of them go to their childhood home.  She inquires about Aegis, pressing Lindow when he darts around the truth, but is interrupted with a comm call as Lindow turns to leave, stating that everyone is lost without her there to guide them.  She beseeches Lindow to take care of himself.

Meanwhile, several helicopters land on a massive landing pad, discharging a great number of God Eaters, including a few familiar faces, such as Kate Laurie, Haruomi Makabe, and Geese Crimson, who are all there to prepare for the upcoming operation.

In a flashback, Johannes lashes out at Sakaki for the God Eater plan, noting the effects that Oracle Cell implantation have had on mice in testing.  As he slumps down in a chair, Sakaki laments the omnivorous tendencies of Aragami that cause them to prey on inorganic as well as organic matter, wondering if perhaps Aragami were sent by God to cull mankind.  Johannes, however, insists that it is humanity’s role to fight back against such a God, and Sakaki departs as he states that he cannot go through with the God Eater plan.

In the Den’s lobby, Lenka is seen among the rest of the First Unit, as Lindow and Sakuya announce that the date of the operation has been moved up, and Lindow announces Alisa’s return to active duty, with the latter appearing and handing Lenka his uniform as he notices a haunting emotionlessness in her eyes, which everyone in the room seems to pick up on.

In the briefing room, all the gathered God Eaters can be seen, including Kate, Haruomi, and Geese, as Tsubaki briefs them on the upcoming operation, announcing the participating personnel, to include Lindow in a command position, who recommends Lenka in his place, citing the latter’s leadership abilities.  Tsubaki orders Lenka’s return to duty with the First Unit and formally announces his role as leader, subsequently handing down other roles and stating their goal for Aragami core collection and going over the details of Operation Meteorite itself.

Afterwards, Lenka and Lindow discuss their duties, with Lindow noting that his team is responsible for collecting cores from Vajras, with the Dyaus Pita supposedly being a type of Vajra.  When Kota states his hesitation at fighting it, Alisa says without a trace of uncertainty that she will destroy it and lindow told them that pita killed her parents .  Tsubaki subsequently calls Lenka for a meeting after soma leave the place.

As Lenka and Kota are seen visiting Kota’s mother’s house in the outer ghetto, the First Unit is seen demonstrating a new type of scattering meteor bullet, which simultaneously eliminates a large number of Aragami in single shots each.  Kota inquires to Sakuya about bullet crafting, to which Sakuya responds that everyone should have made their own bullets at some point.  Kota asks Sakuya to teach him the ins and outs of bullet crafting, as she agrees.

Later, Lindow and Sakuya are seen in Lindow’s room, with Sakuya wondering about the safety of the operation and stating her single-minded desire to protect Lindow.

At his mother’s house, Kota reminisces on what Sakuya told him about the role of Gun-type God Eaters being backup for their comrades.  Lenka responds that he merely has to lead others so that no one has to die.

Later on, a number of helicopters can be seen taking off from a helipad, as Lindow and Lenka have a chat and Lenka finally returns Lindow’s compass to him.  Lenka states that he’s finally found his purpose, and Lindow passes the compass back to Lenka, telling him to pass it onto someone who needs to find their own way.

As Operation Meteorite finally begins and the different Aragami species converge on their respective locations, Lenka issues orders from within the Den’s command center as the various teams arrive at their assigned locations.  Tsubaki announces the commencement of the operation, and all teams fire their meteor bullets.

In another flashback, Johannes delivers a handmade protection charm from Sakaki to Aisha, who lies pregnant with Soma in a hospital bed.  As Aisha smiles, Johannes notices the progressing Oracle Cell infection spreading across her body.  Back in the present, the meteor bullets scatter, piercing every Aragami in the respective areas with beams of Oracle energy as Lenka watches on in awe.  Hibari announces completion of the first phase, and as the smoke clears, every Aragami can be seen debilitated.  The various teams descend from their helicopters as the second phase begins, devouring all the cores on the field as Tsubaki states that such a tactic is only possible due to the tactic he used against the lone Borg Camlann with his damaged God Arc.

Back in the past, Aisha can be seen giving birth, as the Oracle cell infection progresses rapidly across her body.  Johannes begs her to stop, but  she pushes onwards, with the doctors delivering the newborn Soma via c-section.  However, the instant they cut into her, the delivery room is completely filled with an enormous writhing mass of Oracle cell tendrils that breaks the glass of the observation area.

In the present once more, Johannes activates a button that switches the guidance function from the Operation Meteorite guidance beacons to one located under water.  No one else notices anything abnormal, but Tsubaki asks to be connected to Sakaki as Lenka has an area map brought up, noticing that all the Aragami are heading towards the dam from before, something he immediately tells Lindow.  Sakaki, however, states that all the devices are supposedly working, as Lindow asks Tsubaki for permission to go on a solo reconnaissance mission.  Lindow stealthily follows the herd of Vajra and is shocked when he realizes their destination.

In the past once more, the delivery room and observation area are seen bathed in blood and completely destroyed, with all the doctors dead.  Johannes wakes up as a mass of Oracle Cells on the ground moves to attack him, deflected by Sakaki’s protection charm, which appears to be made of or infused with Bias Factor.  As Johannes notices the sound of a crying baby, he moves to the delivery room to find a newborn Soma and Aisha’s body, converted by the Oracle Cell infection into the beginnings of the Nova.

In the present, Lindow’s connection is suddenly lost as all the Aragami begin to converge on Lindow’s location at the dam.  However, the First Unit is suddenly beset by a herd of Chi-you, as the guidance systems begin to go out of control and attract all manner of Aragami.  Tsubaki subsequently orders Lenka to mobilize and assist Lindow, with Licca putting the finishing touches on Lenka’s repaired God Arc.  As Lindow downs a Vajra, more converge on him as he prepares to fight on.  Lenka is seen mobilizing in the helicopter as the Dyaus Pita can be seen awakening.

「Have you ever seen...」 by GHOST ORACLE DRIVE