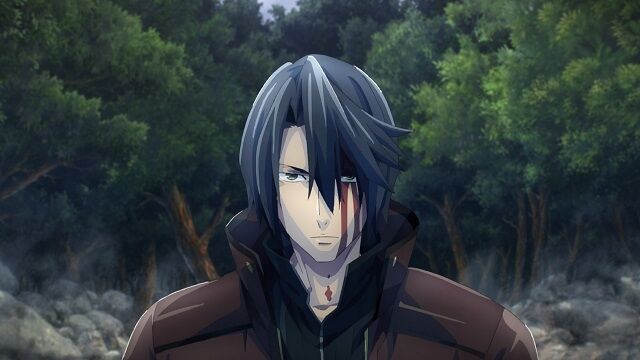 The episode opens with Lindow fighting off the horde of Vajra at the dam.  Back at the Den, Tsubaki asks Sakaki if Lenka’s God Arc is ready, to which he responds in the affirmative, as Lenka approaches the battlefield in a helicopter.

Meanwhile, the First Unit is seen fighting off a group of Chi-Yous, as Tsubaki directs Sakuya to destroy the guidance device and move the First Unit to aid Lindow.  Back at the dam, Lindow continues fighting the Vajra and is hit by one of their electrical attacks, but devours one and hacks away at another with his God Arc.  As Lenka approaches, Licca announces that his God Arc is on its way, proceeding to launch it from another helicopter by way of aerial rocket sled.

As it approaches, Lenka leaps from his helicopter and intercepts it in midair, landing on the sled and interfacing with the God Arc to fire a volley of enormous lasers that penetrate a number of Vajra.  Landing on the ground near Lindow, Lenka’s God Arc can be seen in its gun form, a massive assembly of four giant laser barrels.  More Vajra approach, but Lenka fires again, sweeping a massive swath of destruction across the battlefield.  However, as his God Arc overheats, Lenka detaches the gun part entirely, revealing an enormous oversized Buster Blade-like weapon with built-in rocket propulsion, which he uses to cleave through a number of Vajra at once.  More Vajra approach, however, and Lenka and Lindow walk into battle together.

Back at the Den, Tsubaki and Sakaki examine recently gathered data along with Hibari, concluding that the disruption of the guidance devices must have been an inside job.  As Lindow and Lenka face down more Vajra, they stop all at once—in deference to the sudden arrival of a familiar face, the Dyaus Pita, wreathed in its characteristic dark aura.  It gives out a weirdly human laugh as Lindow launches a stun grenade, but the Pita shields itself from the flash with its wings.  Lenka activates his gun form, smaller this time, and fires a volley at the Aragami, but it dodges with ease, taking only two hits.  However, it seems to be unfazed, running away through the woods of anti-Aragami trees.  The two God Eaters pursue, finding the Pita waiting atop a cliff.  It lets out a roar and restrains the two with strange vines from underground, but the rest of the First unit arrives on the scene.

As the Pita prepares for battle, Lindow gives his famous “three orders” speech to the gathered First Unit, and the group launches into battle.  At the Den, Hibari conclusively determines that the guidance devices were hacked from within the Far East Branch; specifically, by Daigo Oguruma.

The Pita continues to manipulate the trees as Lindow leaps into battle, Kota and Sakuya supporting him as he directs Soma and Lenka to deal with the trees.  At the Den, Tsubaki leads a task force to apprehend Oguruma, but he is nowhere to be found; however, the task force discovers a video of Oguruma brainwashing Alisa.

Back on the battlefield, Sakuya directs Alisa to take out the Pita’s wings. However, Alisa’s brainwashing kicks in, and she points her gun at Lindow, but Lindow’s prior advice for centering herself causes her to lose control as she begins firing wildly. Sakuya subsequently slaps her, bringing her back to her senses as she has a mental breakdown.  As Lenka, Soma, and Kota attempt to deal with the trees, the Pita triggers them again, pinning Lenka, Kota, and Sakuya against a cliff face with Oracle spikes.  Lindow attempts to come to their aid but is intercepted by the Pita.  Alisa is still experiencing her breakdown, but Lenka snaps her back to herself with some motivational words about the nature of true strength.  She takes up her God Arc and fires directly at the Pita, distracting it from Lindow.  As she reconciles herself with Lenka and Sakuya, the three of them prepare to take action.

An explosion in the distance calls their attention, and Lindow instructs the rest of the First Unit to head towards the settlement at the dam while he deals with the Pita alone.  As a second explosion resounds, Lenka convinces Sakuya to leave Lindow to his fight, and they depart, Sakuya with tears in her eyes and Lenka with a determined expression.  Lindow gives Lenka some parting words, and the latter departs as well.

As Lindow is left alone with the Pita, the two charge into battle.  More Aragami converge on the dam as the First Unit proceeds onward, and Lindow is seriously wounded by the Pita’s tail, slumping against a rock.  The Pita approaches him in a scene very reminiscent of the end of Moon in the Welkin, but a hidden stun grenade triggers and distracts the Pita for long enough for Lindow to tear through the Pita’s wings with his God Arc.

Meanwhile, in a flashback, the Aragami are shown ravaging humanity in the early days of their advent.  Johannes lies on his couch, absentmindedly watching the news, as a young Soma approaches him, calling out for his mama.  Johannes sews up a torn teddy bear as Soma reaches out for a photograph of Aisha.  Soma wanders out into a hallway and is noticed by a Fenrir soldier who brings him back into Johannes’ room and notices Johannes on the ground, having attempted suicide by medication overdose after viewing a report on Aisha’s Nova transfiguration.  At a Fenrir hospital, Johannes and Sakaki have a discussion, where Johannes laments as to why he survived the incident—and Sakaki makes first mention of the Devouring Apocalypse, a theory that states that Aragami will devour one another until only one gigantic Aragami is left to devour the planet itself before departing the planet, having “reset” it to a primordial state.  Johannes, however, takes this to heart, wondering if he was spared in order to “save” the planet.

Back in the present, Johannes and Lenka independently reflect on their goals, as the First Unit approaches the dam settlement—but the Pita’s sudden arrival interrupts them, with Lindow’s tattered arm dangling out of its mouth.

「NO WAY」 by GHOST ORACLE DRIVE