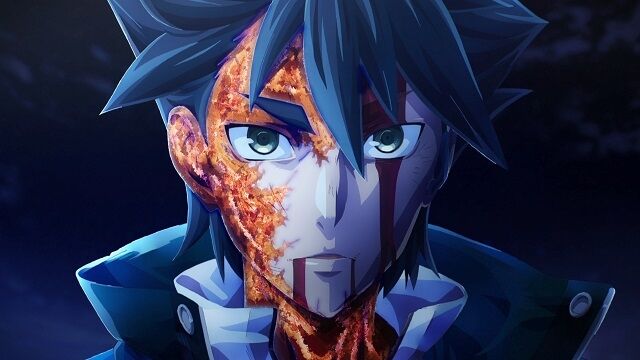 As the episode opens, Hibari reports that the First Unit has gone offline.  Tsubaki orders a search, but all the other guidance devices begin to act up.  Johannes is seen authorizing Tsubaki to destroy the devices and locate Oguruma.

The scene then cuts to the First Unit, where Sakuya collapses upon seeing the Dyaus Pita carrying Lindow’s arm in its mouth.  Soma goes to pursue, and Lenka directs the First Unit to follow him.  Soma attempts to engage the Pita, but it easily overpowers him.  However, Sakuya then attempts to take it down with a fusillade of bullets, but it instantly overpowers her, Alisa, and Kota with a lightning strike.  Sakuya breaks down upon regarding Lindow’s bracelet.

As a number of civilians from the dam approach Lenka to report on their situation, Lenka remembers what Lindow told him, instructing everyone to assemble and directing Soma into battle alongside him.  The civilians go to the aid of the First Unit members as Soma retrieves Sakuya.

The Pita is seen destroying a Vajra as Lenka briefs everyone—the civilians and the First Unit members—on the situation, and on where things stand with regards to their objectives, motivating everyone to action as No Way Back begins to play.

Sakuya hefts her God Arc and moves to destroy the guidance device with Soma’s assistance, with everyone else splitting up to distract the Vajra or engage the Pita.  The civilians direct Soma to the dam, where the guidance device is located, and he jumps in after it.

A number of civilians, and Sakuya, move to distract the Vajra with grenades and gunfire as Lenka engages the Pita alone.  His God Arc begins to break, but he jettisons the massive outer blade to reveal a powered inner blade, which deals noticeable damage to the Pita before it blasts him away.

Soma, noticing the underwater guidance device, destroys it with a Charge Crush, causing the Vajra to leave.  Lenka continues to engage the Pita, this time with Alisa’s assistance, as the Pita’s assault begins to further damage his God Arc.  Soma, Sakuya, and Kota then move in on Lenka’s position for assistance, facing the Pita down together.

Lenka dodges a number of lightning blasts as Alisa moves to devour the Pita.  However, none of the First Unit’s attacks do any damage.  Soma goes in for an attack, but the Pita fakes him out as he narrowly dodges a fatal attack and moves to strike its damaged wing at Lenka’s direction.  Lenka jettisons yet another part from his God Arc and moves in for the attack, as Kota and Sakuya provide support along with Alisa and Soma.  Kota and Sakuya deploy a massive triangular field that absorbs and neutralizes the Pita’s lightning attacks.  Soma moves in for a further attack, as Lenka’s God Arc finally begins to crack the Pita’s wing.  The Pita attempts to counterattack, but Lenka’s God Arc deploys a number of options that hold the Pita back with a laser barrage.  However, the assault overtaxes Lenka’s body and God Arc, accelerating the Oracle Cell infection and shattering the God Arc once more—as the Pita’s wing-blade snaps cleanly in half.

Lenka gets up, but the Pita becomes enraged, shattering the bounding field and blowing the First Unit members back with a powerful lightning field.  Lenka moves in for an attack, deploying his God Arc’s options once more, which are sliced apart by the Pita’s wings as Lenka himself is delivered a mortal blow.  The Pita turns to leave Lenka’s location, as Lenka crawls towards the shattered wing, the infection taking a very noticeable toll.  The remaining First Unit members take to their feet for a continued assault, distracting the Pita and holding it back long enough for Lenka to reach the wing blade at the cost of being grievously wounded and blown back themselves.  However, the First Unit members merely laugh, and the Pita turns around to behold Lenka’s final God Arc, having “devoured” the base of the Pita’s wing blade to form a new weapon.  Lenka uses this blade to effortlessly cleave through the Pita’s wings, stating his existence and reason for living as a God Eater.  With a decisive blow, he splits the Pita into countless pieces, dodging a mortal blow from the Pita and finishing it off with a decisive blow to the head which pierces its core, destroying it as the Oracle Cell infection consumes Lenka’s entire body, turning his hair and eyes brilliant gold. Defeated, the Pita falls to the ground.

All is peaceful at the dam site as the Pita’s body disintegrates, Lenka himself turning to face the other First Unit members as he falls to the ground.

In a flashback, a newly-arrived Paylor Sakaki is seen in Johannes’ office as a young Soma leaves.  Johannes returns to him the charm that protected him from Aisha’s Nova transformation.  He states that he was able to use that very technology to develop the first anti-Aragami walls, announcing that he now has the power to save all of mankind and displaying the blueprints for the Aegis plan, as well as the basis for the Ark Project.  In the present, Oguruma announces that he has disposed of Lindow, asking if he will be able to board the Ark.  Johannes outlines the Ark Project to Oguruma, as he reveals Aisha’s body, the transformed Nova, installed atop Aegis Island, which extends predator tendrils to devour Oguruma.

Once more in the past, Sakaki expresses his reservations about the Ark Project, comparing it to the Plank of Carneades, yet nonetheless announcing that he will not interfere with Sakaki’s plans, despite searching for his own way to save humanity.  In the present, Johannes wonders if Sakaki has found the answer, asking if he truly believes that humankind and the Aragami will ever be able to communicate and coexist.

In a briefing, Johannes announces to the Branch’s God Eaters the success of Operation Meteorite and the collection of the required amount of cores.  He mentions Lindow as a traitor, though not by name, and states that Oguruma will one day be found and disposed of.

On a mission, Soma notices a shadow—Shio—who vanishes immediately thereafter but is seen shortly on a cliff, hinting at a peaceful future for mankind and Aragami.

As Tsubaki briefs the First Unit on mission details, the door opens, and a recovered Lenka enters, giving the First Unit the same “three orders” speech for which Lindow was known.

In a final scene, Shio is seen scavenging the wasteland, as smoke from Lindow’s cigarette can be seen wafting from behind a piece of rubble.  In the God Arc storage room, the remains of Lindow’s God Arc can be seen, as it mysteriously roars to life.

「No Way Back -The Path of the Lotus-」by Benjamin Franklin