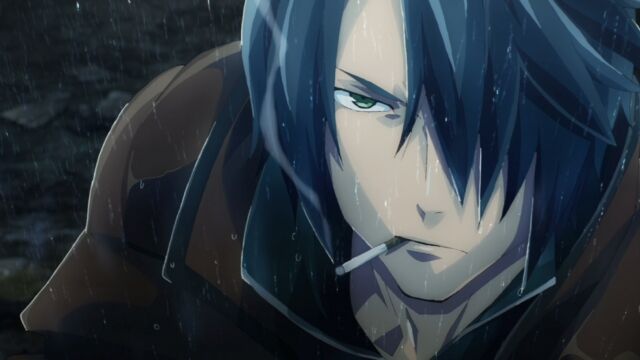 The episode opens with the members of the First Unit, most notably Sakuya, remarking on the transformation of Lenka's God Arc from a sword form to gun form.  Lenka himself is dumbfounded, but shortly finds himself unable to fire and is assailed by an Ogretail as Lindow shouts at him to revert his God Arc to its blade form.  As Sakuya blasts the Ogretail away with a single shot, more Ogretails are crushed underfoot by an arriving Vajra.  As Lindow, Soma, and Sakuya prepare for battle, Lenka looks on.

Lindow instructs Sakuya to eliminate the Aragami around the perimeter and Soma to hold down the Vajra while he (Lindow) takes care of it.  Lenka states his intention to help, but Lindow dismisses him, telling him to go hide with Eric.  However, Lenka insists on providing aid, so after he and Sakuya take Eric to safety, Sakuya explains to Lenka how to operate a gun-type God Arc.  The two of them rush out and fire upon multiple Aragami, with Lenka taking out a Kongou in a single blast.  However, with the Vajra looming close as Lindow and Soma fight it, Sakuya tosses a stun grenade to blind it.  Noticing that Soma appears to be overwhelmed, Lenka rushes in and fires off another blast directly at the Vajra's face from close range.  This, however, incites the Vajra's wrath, and Lenka is knocked away by the Vajra's area-effect lightning blast.  Lindow moves to Lenka's aid; however, the Vajra looms above them both, ready to strike.

The scene then cuts to Lenka being rushed to a medical facility on a gurney.  He loses consciousness, but the vision of an unknown Aragami-like face jolts him awake.  Tsubaki then locks Lenka in a holding cell to await court-martial for disobeying orders not to mobilize.  Lenka demands to know what happened after he lost consciousness during the battle against the Vajra, but Tsubaki merely replies that she "never should have let him go."  On her way out, Tsubaki runs into Lindow, who remarks on Lenka's New-Type status as Tsubaki tosses him the compass that was in the pocket of Lenka's discarded Fenrir uniform.

The next scene shows Johannes von Schicksal video-conferencing with the higher-ups at Fenrir, who hand down a judgment that Lenka must surrender his God Arc as punishment for disobeying orders.  Johannes remarks that it would behoove them to allow Lenka to keep his God Arc due to the rarity of new-type users; however, the higher-ups retort that a new new-type, Alisa, is on her way from the Russia Branch as they speak.

Later, Lindow comes to visit Lenka at his holding cell.  He chastises Lenka for his actions, yet at the same time he commends him for his bravery, while subsequently announcing news of the Vajra's destruction.  However, he goes on to state that Eric died in the battle.

Meanwhile, on the plane, Daigo Oguruma hands Alisa her medicine.  He asks if she is nervous, to which she responds negatively, as Oguruma is there with her.  Oguruma explains that there is another New-Type at their destination (the Far East Branch) and wonders if he's as good as Alisa, to which she replies that there is no God Eater as good as her.

The scene then cuts back to the battle against the Vajra.  Soma insists that Lindow leave Lenka behind lest he be killed by the Vajra, but Lindow replies that there's no way that can happen.  As Lindow runs towards Sakuya carrying Lenka's body, she (Sakuya) fires her last bullet, announcing further that she had used up her last stun grenade.  As the Vajra lets loose with another lightning blast, the Second and Third Units arrive on the scene, where Tatsumi orders them to action.  They bombard the Vajra with gunfire, holding it in place as Lindow chastises Tatsumi for the Defense Unit's late arrival.  Lindow then tosses Lenka's unconscious body to Tatsumi as he fires up his chainsaw and walks towards the Vajra, preparing for battle.  He leaps into the air and descends on the Vajra with a strike to its head from above.

The scene then cuts to the aftermath of the battle, with Lindow standing atop the Vajra as a nearby civilian thanks them for Lenka’s assistance.  Eric is then immediately and unceremoniously devoured by an Ogretail.  Eric breathes his last with a smile on his face as the sun rises.  Back in his cell, Lenka remarks on how Eric saved him.  Lindow then tosses him the compass he received from Tsubaki as he asks if it is accurate.

Meanwhile, in the Director’s office, Johannes and Tsubaki are discussing the Aegis Plan and the impending arrival of the second new-type, Alisa, from the Russia Branch.  Johannes further expounds upon the Plan, remarking that the loss of a new-type would prove to be a headache for the plan.  Lindow and Tsubaki are then seen in formal suits as they head to Eric’s funeral.  Lenka is then seen sitting in his cell, gazing at his compass.

Later, the Defense Unit, along with Lindow, Hibari, and Licca, hold a toast to Eric’s memory as they discuss his final moments.  Hibari mentions Lenka’s attempts to fight off the Aragami without a God Arc.  Lindow mentions that there was another person like that, long ago, but when pressed for details by Hibari, he claims that he does not remember.  He then proceeds to Lenka’s holding cell and asks him about the incident, as Lenka responds by demanding if Lindow would have just run away had he been in Lenka’s situation.  At the end of the scene, Lenka begs Lindow to teach him how to fight.

The scene then cuts to the planes transporting Alisa, as they come under attack from a swarm of unknown flying Aragami.  They destroy a handful of planes as the First Unit is ordered to mobilize.  Tsubaki remarks that it will be just Lindow and Sakuya, but Lindow responds by mentioning Lenka as a replacement.  Tsubaki visits Lenka in his holding cell and gives Lenka a choice:  either wait for the judgment from the higher-ups, or prove himself on the battlefield as someone useful.  Lenka accepts the offer, heading out to join Lindow and Sakuya on the battlefield as Tsubaki herself notes her disapproval of Lindow’s plan and instructs Lenka not to let Eric’s death be in vain.

As Lenka leaves his cell, he comes upon Lindow, who delivers his iconic speech:  “I have three orders.  Don’t die.  If your life is threatened, run.  And hide.  Then wait for your chance, and strike.”  Lenka remarks that that’s four orders, to which Lindow merely replies not to go in the wrong direction.

Johannes is then seen in his office, as the scene cuts to another flashback of him, Aisha, and Sakaki as Fenrir scientists researching Oracle cells.  They remark on the unnatural speed of the cells’ evolution as the scene cuts back to the flying Aragami attacking the planes and Lenka preparing to mobilize with Lindow and Sakuya.  Meanwhile, Alisa has the hatch of her plane opened as she prepares to do battle with the flying Aragami.