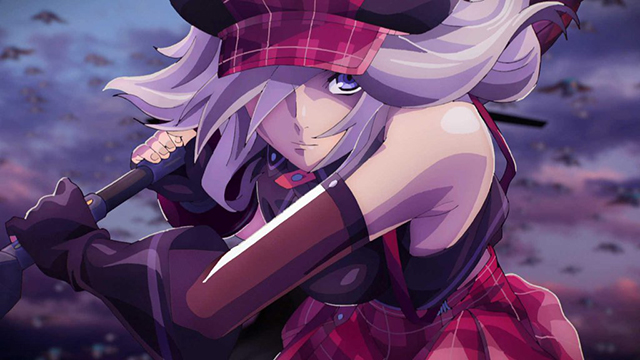 The episode opens with an Ouroboros emerging from the depths of the ocean and leaping across the waves.

Far above, a helicopter containing Lindow, Sakuya, and Lenka travels to its destination, the planes carrying Alisa that are under attack by the unknown flying Aragami.  Lindow mentions to Lenka that the new God Eater is a new-type like him.

As the plane comes into view, thousands upon thousands of the new Aragami can be seen swarming it.  Down below, Alisa can be seen fighting off the Aragami that surround her.  Lindow broadcasts on Alisa’s comm frequency, instructing her to escape, but Alisa denies, stating her intention to fight.  However, Lenka nonetheless prepares for battle as he and Sakuya lay down cover fire from the helicopter.   Numerous Aragami fly under the plane as Alisa hooks herself to the plane’s fuselage to engage them on the underside.  She demonstrates her God Arc’s devouring capabilities as she devours one of them, gaining an Aragami Bullet to reload her empty magazine.  Shortly thereafter, one of the flying Aragami suddenly grows an upper part and lets out a roar as more of them are summoned to the plane.

The scene then shifts to a flashback of Johannes, Sakaki, and Aisha as they demonstrate the resonance phenomenon wherein separated Oracle cells can call out to each other.

Meanwhile, as the new swarm of Aragami approaches, Lindow instructs the helicopter’s pilot to approach the plane so that he and Lenka can descend and assist Alisa directly.  Alisa demonstrates remarkable proficiency in aerial combat as she swings around via her hook and blasts away at the flying Aragami.  At this moment, Lenka and Lindow descend onto the plane, Lindow instructing Lenka to pursue Alisa as she retreats inside the plane.  Alisa, however, is having none of it, and places Lenka in a submission hold, which he then breaks out of as the two engage in hand-to-hand combat.  Alisa lays him out before announcing her intention not to leave the plane or go with Lenka and Lindow.  Further inside the plane, Lenka witnesses her reasoning—many Fenrir members are injured, including Daigo Oguruma, and Alisa can be seen helping them.

Lenka explains the situation to Lindow, who explains that they can only survive if they only rescue Alisa.  Lenka, however, refuses that course of action, stating his intention to save the transport plane and make it to the Far East Branch.  Alisa agrees to an alliance as the three of them—Lindow, Lenka, and Alisa—decide on a course of action for dealing with the Aragami.

Sakuya fires a flare that scatters the Aragami with a massive explosion as Lenka and Lindow begin to fight.  Lenka quickly finds himself out of ammo, but he shifts his God Arc to its blade form and devours one of the flying Aragami in the process of evolving from an incredible distance, replenishing his ammo.  Lenka subsequently demonstrates remarkable proficiency in form-changing his God Arc as he expertly fights off one Aragami after another.  The teamwork between him and Alisa is readily apparent as the two of them cover each other’s angles perfectly while destroying more Aragami.

As the last of the Aragami are destroyed, the three of them breathe a sigh of relief as the operation ends.  Meanwhile, Tsubaki announces the operation’s success to Johannes back at the Far East Branch.  On the plane, Alisa questions Lindow about the Far East Branch’s practices, displeased by the Branch’s apparent disregard for anyone who is not immediately useful to them.

Suddenly, however, Sakuya announces the approach of a new, massive Oracle reaction.  Sakuya jumps out of the helicopter with the pilot strapped to her as the plan to make the helicopter into a decoy is announced.  The source of the reaction is soon made apparent as the Ouroboros from before descends from the sky, truly the size of a mountain, stunning Lenka and Alisa into silence.  Lindow states that is an Aragami that they should steer clear of, but Lenka remains silent.

Meanwhile, a further flashback to the laboratory displays the ability of Oracle cells to multiply and divide massively, as an induced reaction causes the formation of what appears to be the first Aragami, which attacks the three scientists moments before they put up a shuttered barrier.

On the plane, Alisa glances at Lenka as the plane flies further towards the Far East Branch.

Retrieved from "https://godeater.fandom.com/wiki/God_Eater_(Anime)/Episode_3:_Alisa_Ilinichina_Amiella?oldid=76155"
Community content is available under CC-BY-SA unless otherwise noted.