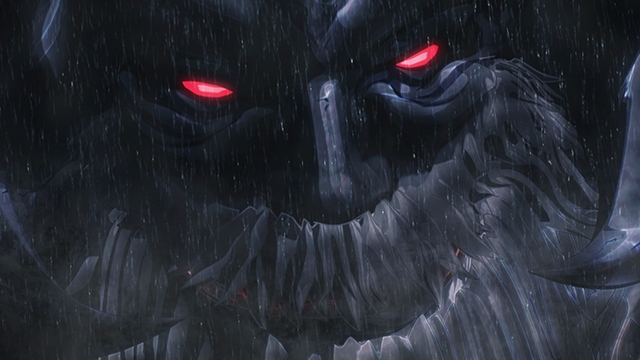 Episode 5: An Eye for an Eye/All in Vain

The episode opens with the First Unit returning from their mission, with Hibari acknowledging the contribution of the needed cores.  Lenka begins to say something to Lindow but decides against it, leaving as the rest discuss the recent situation with the civilians and the differing viewpoints Lenka would have as someone from the outside.

Lenka awakes from a nightmare of the civilians being killed by Aragami as it rains outside.  In the distance, a Dyaus Pita can be seen devouring a corpse.

Later, Lenka inquires about the Aegis Project with Hibari, who states that the project is less than 1% completed, citing the size of Aragami cores used as a reason.

Kota walks in on Lenka in the God Arc storage room where the latter looks at a swiftly-decreasing counter listing the number of survivors within the Far East Branch.

Soma approaches Hibari, who states that the Director has a special mission for him.  He joins Lenka and Kota in the God Arc storage room, where he challenges Lenka’s resolve for coming to the Far East Branch.

Subsequently, Sakuya, Lenka, Kota, and Alisa can be seen addressing Tsubaki, who gives them the rundown of their next mission: extract the cores of two large-type Aragami.  Sakuya counters that they lack the manpower for such a mission and proposes a mission to hunt six Gboro-Gboros instead, which Tsubaki approves.  However, Lenka and Kota both express their desire to hunt a large-type instead.  When faced with the prospect of hunting a Vajra, both of them are hesitant, but Alisa voices her enthusiasm for the Vajra mission.  Sakuya reluctantly approves the operation.

Later on, in the middle of a rainy junk-filled wasteland, the four God Eaters can be seen fighting the Vajra.  They take one down, but another soon appears.  Kota is hesitant to finish the fallen Vajra off, but Sakuya encourages him, as he delivers the final shot and Lenka devours the core.Meanwhile, Alisa pursues the second Vajra into a building which turns out to house a number of civilians, all of whom flee as the Vajra pursues them out.  However, a third Vajra breaks through the wall of the building as Alisa follows, the two Vajras flanking the other three God Eaters.  As one of the Vajras is about to strike, it is taken down by the Dyaus Pita from earlier, wreathed in a dark aura—Alisa recognizes this Dyaus Pita as the Aragami that devoured her parents.

</p>As the Dyaus Pita devours another Vajra, the four God Eaters watch on in horror as Alisa calls the Aragami’s name and flies into a berserker rage, downing a handful of pills as she charges at the Dyaus Pita.  Sakuya instructs Kota and Lenka to follow her and bring her back.  Meanwhile, the Dyaus Pita makes short work of Alisa, sending her flying with a powerful strike and scattering the other three with a lightning attack.  As Lenka watches on, the Dyaus Pita kills a number of civilians at once with a single claw strike.  With Sakuya and Kota still paralyzed, Lenka cries out in anger as the Dyaus Pita pursues further civilians, but Alisa draws its attention as she fires on it.  However, it proves to be more than a match for her, outwitting her with superior speed and getting the drop on her from behind a rock as it sends her flying against another rock face.  It then turns its attention back to the civilians, but as Lenka jumps down from above to attack it, it extends its telltale skeletal wings and intercepts Lenka in midair with a winged slash, dealing a grievous wound. The newly awakened Dyaus Pita advances on the civilians, but Lenka holds it back as the Aragami emits a strangely human laugh.  As the Bias Factor flows further through Lenka’s body, the Dyaus Pita breaks his God Arc and impales him against the ground.  Lenka struggles to rise, but is forced to watch as the Dyaus Pita massacres the rest of the civilians before his eyes.  As what remains of his God Arc attempts to transform, the Dyaus Pita shatters it once more, bathing Lenka in blood as it devours the rest of the civilians.  Alisa fires on it from a distance, but it is futile.  The Dyaus Pita turns its attention to her, freeing Lenka from its grasp.  However, Kota and Sakuya arrive on the scene, distracting the Dyaus Pita so that Lenka can carry Alisa to safety.  The Dyaus Pita attempts to pursue him as he drops to the ground, out of strength.  Lenka gives up, praying to God to deliver him from his predicament—as the Dyaus Pita’s weight breaks the fragile land bridge supporting the three of them, sending them all plummeting into a river below.

The next scene shifts to a flashback, as Sakaki, Johannes, and Aisha look upon the results of further Oracle Cell research.  Sakaki explains the existence of an Oracle Cell core among the cell colony while expressing skepticism as to how their research was approved for continuation.  Johannes answers a phone call as the three of them are called for a meeting with the U.S. military.  The military representative explains to them the discovery of various mutated animal-like organisms discovered across the world, including a mutated canine creature discovered on the American west coast.  He explains how conventional weaponry, such as guns, has no effect on these creatures.  As he states, all of these life forms share a certain commonality—they are all Oracle Cell colonies unified by a single core, presenting to Johannes a report on the newly discovered creatures . Sakaki expresses his surprise at the Oracle Cells’ evolution, as the military representative beseeches Johannes’ help as the director of Fenrir’s biochem research and energy development.

Retrieved from "https://godeater.fandom.com/wiki/God_Eater_(Anime)/Episode_5:_An_Eye_for_an_Eye_(All_In_Vain)?oldid=76290"
Community content is available under CC-BY-SA unless otherwise noted.