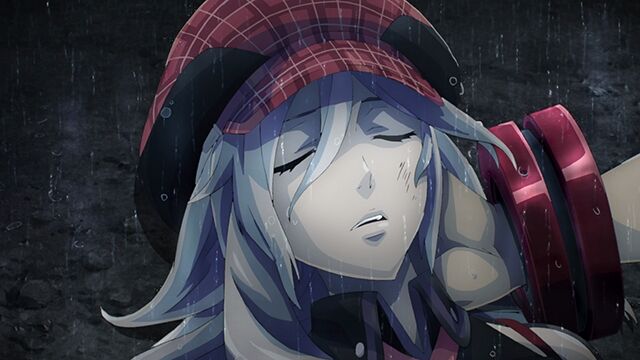 The episode opens with Sakuya radioing the Far East Branch about the whereabouts of Lenka and Alisa.  They have been found, but they have not responded.  Tsubaki demands the dispatchment of a search party, but there is no one available.

Lenka awakens, submerged in a river, as he remembers his God Arc being shattered by the Dyaus Pita.  A short ways away, he notices the remaining hilt, as well as Alisa’s body against a rock.  He listens for a pulse and begins to perform CPR, begging her to live as she finally regains consciousness.  Overhead, in the City of Mercy, more Aragami are on the prowl.

Inside one of the buildings in the city, Alisa reawakens on a bed as she has flashbacks of the Dyaus Pita’s attack.  She demands to know what happened to “Pita,” but Lenka has no further information.  Alisa experiences a flashback to her parents’ death as she notices she has only one remaining pill.  Lenka reveals that he could not find Alisa’s God Arc, so she leaves to retrieve it, but stops upon seeing how injured Lenka is.  Returning to Lenka’s side, she performs basic first aid before noticing Lenka’s destroyed God Arc, which elicits no response when touched.

Down below, a Vajra prowls about.  Alisa watches the door of their room in fear as she continues to experience flashbacks to the moments before her parents’ deaths.  A further flashback reveals a scene of Alisa’s life as a young girl in the outer ghetto, which turns out to be the moments immediately preceding their being devoured by the Dyaus Pita.  Alisa hides in a wardrobe as she bears witness to the Dyaus Pita devouring countless civilians before delivering the same fate to her parents, the Aragami meeting her gaze.

Back in the present, an Ogretail breaks down the door to Alisa’s room.  She reaches for her empty pill case before Lenka knocks the Ogretail away and attempts to fight it with his broken God Arc.  However, he is overpowered, and the two of them are knocked out a window and land underground.

Momentarily safe from the Aragami, the two of them stop and regain their senses.  Lenka comments on the effectiveness of Alisa’s first aid as he wonders if his God Arc can be fixed.  However, Alisa remarks that Lenka’s God Arc is dead, its spirit gone, now just a hunk of metal.  As Lenka and Alisa hide from another Ogretail, Alisa laments the loss of her God Arc.  The two of them decide to sneak out in search of it.  As they run, they notice more Aragami pursuing and devouring various humans along the way.  The two of them desperately run from pursuing Ogretails as they continue their search.  At one point, Lenka, noticing that Alisa is cold, offers her his coat.

Eventually, the two of them notice the hilt of a God Arc in the river, which turns out to be Alisa’s.  However, as she goes to pick it up, she is assailed by an Ogretail and finds herself unable to fight to her fullest potential, held back by her PTSD as two more Ogretails join in.  Paralyzed by her flashbacks, she drops her God Arc and begins apologizing profusely as a great number of Ogretails close in.  However, Lenka throws his God Arc to temporarily stun one, attempting to fight them off.  Lenka rushes at the Ogretails but swiftly finds himself outnumbered, his desperate actions amounting to nothing.  He attempts one final, desperate strike, but his God Arc is knocked away.  Left with no other options, he uses his body as a human shield to protect Alisa—at the exact moment that a stun grenade is thrown and Lindow arrives on the scene, massacring the Ogretails.

After the ordeal, Lindow remarks on the situation, stating that Lenka had failed in his duty to protect others and had forgotten Lindow’s orders.  He demands that Lenka pick up his God Arc and asks him why he became a God Eater.

The final scene is another flashback, as a young Johannes attempts to log onto a faulty Fenrir server.  Aisha inquires about some files to be submitted before he leaves.  Sakaki and Aisha then remark on Johannes’ current condition, before Aisha tracks down the file Johannes had mentioned, noticing a number of revisions contrary to the actual results of the experiment.  She later arrives at Johannes’ room with some food, expressing her worries about his health.

A news report announces an update on the unknown life forms, with the United States government officially recognizing them as such.  Johannes switches off the television and makes some coffee as Aisha mentions Johannes’ falsification of the report.  He explains that he knew the risks but could not stop, in the name of science, but Aisha states that he is not to blame.  As Johannes collapses to the floor in Aisha’s embrace, the episode ends.

「NO WAY」 by GHOST ORACLE DRIVE