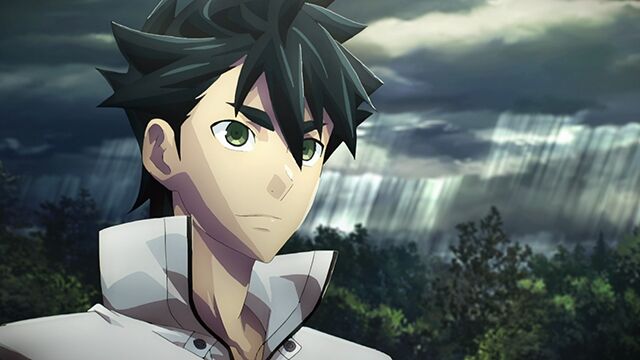 Episode 7: A Flower in Bloom

The episode opens with Lindow messaging HQ.  He is holed up with Lenka and Alisa in an abandoned warehouse, unable to move due to high concentration of Aragami in the area.  Alisa apologizes to Lenka for the previous episode’s events while Lindow considers the possibility of moving out.

On the move, Lindow indicated their destination, an out-of-place tree-covered mountain.  Lenka attempts to touch one of the trees, but Lindow stops him.  Looking down, Lenka notices a farm, inhabited by a number of civilians, including the little girl turned away in the incident involving the civilians from early on.

Later, Lindow and Lenka depart to scout out the area, leaving Alisa behind.  Lindow then reveals a storeroom to Lenka, containing a huge amount of smuggled-out Fenrir supplies.  The two of them carry two of the boxes out with them, which turn out to contain Oracle ampules.  As an Ogretail passes by, one of the trees bursts apart and skewers it.  Lindow is then shown to inject a tree with one of the ampules, revealing that the trees are all Aragami themselves that have been designed by Lindow to prey on smaller Aragami as the settlement’s defense system.  Lenka objects, yet Lindow points out the hypocrisy in this, noting that even Lenka’s God Arc was made from an Aragami and asking him why he fights, while also telling him not to give up on his own God Arc.  Suddenly, an alarm sounds, indicating an Aragami having gotten past the trees.

Lindow instructs Lenka to head back towards the settlement to protect the civilians.  Upon arrival, the Aragami in question is revealed to be a Borg Camlann.  Lenka rescues a civilian as he calls out for Alisa, who can be seen experiencing PTSD flashbacks as she hides in a closet.  He asks for a smokescreen, throwing a received grenade at the Borg Camlann as he flees with a number of civilians.  As they hide, the civilians demand that Lenka fight for them, but Lenka, suffering from an existential crisis, cannot remember why he fights.  Suddenly, however, he receives a flash of inspiration and takes charge of the situation.

He asks if there is a source of electricity nearby and has another civilian draw him an area map, announcing his plan to lure the Borg Camlann into the lake and open the dam to wash it away.  Lenka realizes that he’d be able to slow the Borg Camlann down with one of the ampules Lindow used on the trees.  When no one is willing to go get the ampule, the girl from earlier volunteers.  The other civilians prepare to take action, dividing up to help Lenka and the girl with their tasks.

As Lenka distracts the Borg Camlann with another civilian’s crossbow, more civilians, including the girl run to the storage room to retrieve the ampule as others run to the dam to prepare to drain the lake.  However, one of the needles from the Borg Camlann’s attack immobilizes the girl’s companion, and she throws Lenka the ampule when she cannot reach.  He loads the ampule into the crossbow and fires it, temporarily immobilizing the Aragami.  As he fires more, it seems to be having an effect—until the Borg Camlann begins blocking the ampules with its shield.  Cornered, Lenka begins to panic, until he remembers Lindow’s words about believing in his God Arc.  He takes the final ampule in hand and injects it into his God Arc’s core, causing it to reach out and grab the Borg Camlann in its devour form and push it into the lake.  At that moment, the dam is opened, and the floodwaters successfully wash the Borg Camlann away.

Lenka can be seen gazing at his shattered God Arc, realizing it is still alive after all.

Lindow, marching over to the edge of a cliff, notices the fruits of Lenka’s efforts, going over to congratulate him.  Lenka states that he owes it to Lindow and his words about believing in one’s God Arc.  Meanwhile, Alisa is staring out a window, lamenting her own powerlessness.

Another flashback displays a news report which states the the unknown life forms have taken their first human life.  Meanwhile, in the lab, Sakaki, Johannes, and Aisha look upon their discovery of a substance that the Oracle cells avoid.  However, despite compiling a report, they find their research suspended by the army, with the apparent purpose of suppressing the data.

Back in the present, Lenka looks down on one of the Oracle ampules and smiles, while Johannes looks upon an image of Aegis Island contemplatively.

「Have you ever seen...」by GHOST ORACLE DRIVE