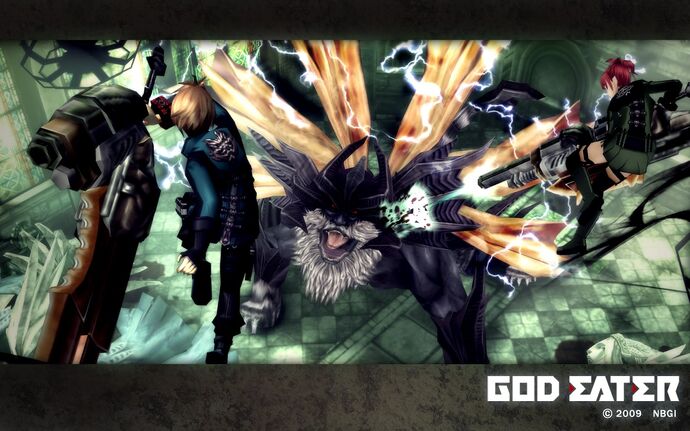 A New-Type God Eater match (the Protagonist) arrives to the Far East Branch and after the compatibility test is made part of the First Unit, the Retaliation squad. After a short time, another New-Type match arrives, Alisa Illinichina Amiella. The Far East Branch director, Johannes von Schicksal, was put in charge of developing the Aegis Project, a project whose ultimate purpose was to create an Aragami-impervious utopia for mankind to live in. At some stage during the development of said project, he realized that such utopia would sooner or later be attacked by Aragami and humankind would be once again defenseless against them. With that revelation, he put the Aegis project on hold an began the Ark project, in which he would trigger a controlled apocalypse to rid the world of all Aragami and create a permanently safe haven for the remaining humans or "Seeds" that would be away from the planet during the apocalypse. To do that, he needed to nurture a huge Aragami that could trigger said apocalypse, Nova, and he needed to obtain a special Aragami's core, the Singularity. He began nurturing Nova by sending high-rank God Eaters on "Special missions" which usually implicated retrieving an Aragami's core (meaning they were nothing more than missions to "gather food" for Nova), and put his son Soma Schicksal to search for the Singularity.

Retrieved from "https://godeater.fandom.com/wiki/God_Eater_(Game)?oldid=92193"
Community content is available under CC-BY-SA unless otherwise noted.