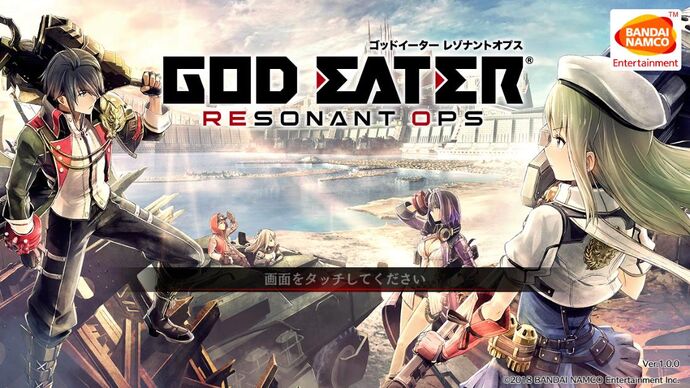 God Eater Resonant Ops is a turn-based game for iOS and Android. Resonant Ops is set in Europe, four years after the events of God Eater 2 Rage Burst, and follows the story of the members of Fenrir HQ's Fourteenth Unit.

The game ran for two years before closing its servers on September 24, 2020.

The game's main story revolves around Leo/Rio Kamui after their recruitment to the Fourteenth Unit, where they meet their fellow members Alek Martin, Sera Kisaragi, their captain Erina der Vogelweid and a girl named Tiona Vitalintu. The first chapter of the story focused primarily on the Fourteenth Unit, and their encounter and confrontation with a group of God Eaters led by an infected Crow.

The second chapter delves deeper on the Divider Project and its predecessor, Noah 0. The Fourteenth Unit travels around Europe, particularly the German, Swiss and Italian Branches in search for answers regarding the "Liberator Technology" which seemed to have ties with Sera's missing sister, Salia. They are joined by a girl named Yumina La Paz in their journey as their Divider, while Tiona fights alongside them as a certified God Eater.

GEReO's events, excluding the holiday-based ones, usually revolves around hunting down various Aragami, particularly the new Retro-species called "Seven Deadly Sins". Despite the name, only five had been released before the game shutdown.

Other events focused on the subjugation of non-Deadly Sin Aragami, like the Crimson Voltumna and Zeltinia, which are believed to be Deusphage variants of the flagship Aragami, Voltumna.

Dividers are newly-placed personnel in Fenrir with the purpose of strengthening the God Eater and supporting tactics, by linking with the God Eater through the "Divider System". The ability of the divider is various, such as raising status abnormality in Aragamis and improving the physical ability of the God Eater. However, using the system causes great mental strain to the supporting divider that can lead to amnesia.