This article is a stub. You can help God Eater Wiki by expanding it. 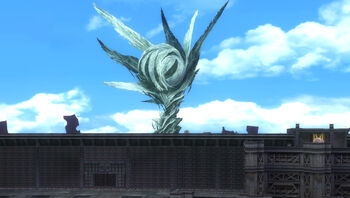 The Spiral Tree (螺旋の樹) is a large, plant-like structure that was formed as the result of Julius Visconti's Singularity powers and the Devouring Apocalypse created by Blood and Yuno continue to devour each other, resulting in the spiral-shape from whence its name comes. It came into existence during the events of God Eater 2, when Julius ceased growing and attempting to devour the world.

It is theorized that the reason both Devouring Apocalypses continue to exist in balance is because they are both being controlled by the same source. Dr. Sasaki believes this is due to the will of Julius, who remains as the Singularity inside the Spiral Tree. However, direct investigation has proved difficult, and the details remain unclear.

The official Fenrir HQ announcement given by Director Feldman stated that the Spiral Tree was a product of Julius and Dr. Rachel's sacrifice to save manking from the Devouring Apocalypse. The rank that julius had been stripped of was also reinstated. Although many people began to feel hope, the proceeding large earthquake and changes to the Spiral Tree have resulted in a growing atmosphere of suspicion.

The Spiral Tree is now under the control of Dr. Rachel's will and has been reformed from an object that holds off the Devouring Apocalypse to one that beckons it anew. A better understanding of the situation is desperately needed, but the Oracle storms and Aragami that pour out from the Spiral Tree make further investigation nigh impossible.

After investigation, it has come to light that the Spiral Tree is like a vascular plant. A unique type of Oracle Cell travels through those fibrovascular bundles, allowing the Spiral Tree to undergo a sort of emergent behavior.

Director Feldman's plan to stabilize the Singularity failed, but thanks to the efforts of Blood Special Forces and Corporal Livie, the danger of the Apocalypse has been averted. More specifically, although a localized Apocalypse was initiated, its progress as slowed to a point where it no longer threatens the human race. With this, the Spiral Tree has vanished, and in its place is a natural sanctuary where new life flourishes.

In God Eater 2 Rage Burst, it is possible to fight Aragami on the foot of the tree and inside the tree proper.

Retrieved from "https://godeater.fandom.com/wiki/The_Spiral_Tree?oldid=93632"
Community content is available under CC-BY-SA unless otherwise noted.