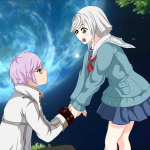 Finally i finished GER main story from the scratch under 14 hours.

Skipped all of the skippable cutscenes, and skip all other non-story missions except if needed (to make some equipments).

Only made a handful of equipment along the way:

Retrieved from "https://godeater.fandom.com/wiki/User:Jashinsamael?oldid=90229"
Community content is available under CC-BY-SA unless otherwise noted.