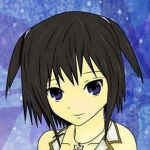 She lost her parents when she was 5 years old  ´cuz of an aragami attack in the outher ghetto. After this event she had lived with old people which took care of her until she was 13 years old, then she obtained a letter and her life has changed. She became gods eater and keeps hunting aragami until now…

She keeps good results on missions and without lost any teammate. She has bad habit going to action without any plans.

She has tsun personality especially when Soma is around. Kaze can normal communicate with everyone if she likes that person. There is a big problem when she has to talk with Soma. They hate each other and Lindow is trying to befriend them but he always fails. If they meet and both have bad mood they're starting to snap at each other and the whole fenrir knows that they are at it again.The weird thing is that their teamwork on a battlefield is excellent. Kaze can always be a loud girl with a pretty smile on her face. She doesn't mind if someone asks her for help on a mission or something. She keeps making good relationships with almost everyone in branch.

She has middle long black hair, but since she dislikes open hair as it gets in the way while fighting she has a twin-tail haircut with red ribbons. Since her favourite colour is black, she usually wears clothes of that color too. She also wears party open jacked so it's not too tight and enables her nimble movement and also to show that she is a girl after all. You'll see her usually in black pants guys got distracted by her skirt on a mission, however you'll still see her with a shirt sometimes. She likes normal flat shoes since she's most of her time on missions.

Lindow Amamiya - She respect him as her leader and listen all his commands time to time she don't like the command but still fulfils it.

Sakuya Tachibana - Good friends, time to time we can found her with Kaze together talking about anything and drinking coffee.

Yuu Kannagi - They have good relationship between them although they know each other for few weeks.

Retrieved from "https://godeater.fandom.com/wiki/User:Kazeshina?oldid=54317"
Community content is available under CC-BY-SA unless otherwise noted.