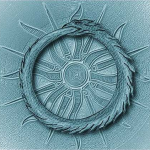 Sometimes I wish that GE franchise was less known by the mass anime and manga fans, just like the old time. I do so, maybe because Ufotable failed to attract more fans to GE, but instead a lot of anti-fans (including AoT fans...)... Well, things that happened can't be changed... (Bal: Seconded...) (Beast: Even in the past, GE series is often bashed by loyal MH fans.) (Matt: MH fans take a steaming crap on anything they perceive as a stain on the hunting genre. Their heads are way too far up their own asses to care.) (Sou: Yeah, no, dungbeetles bashing on things they don't like is part of the giant hotpod of reasons I don't participate in fandoms. The mind hive mentality just makes it worse.)

- Hey hey, did you hear something?
- What is it this time? You always start a random story after mission...
- The story of "The 4th room on the 4th floor"?
- What's that? Some kind of urban legend?
- Umm. That's a popular story lately. Would you like to hear?
- Alright. At least it will relieve the stress.
- OK! Then I will start:
"We all know that on the 4th floor of this den, there's a room that is locked all the time. Nobody can open the door. Nobody can break the window. Nobody in, nobody out. This very room isolates itself from the world. But, there're rumors, saying that at certain times of day, the door will be opened. If you're a girl, and you see that, remember 3 things. First: Turn your back, head to the elevator. Second: You may hear someone calling your full name. Don't answer, don't turn back, just wait until the elevator comes. Third: When the elevator opens, it will be empty. Calmly walk in, don't turn back to see the buttons, just press any button that isn't 4th floor. Then only when you know the elevator is moving, you may turn. And then in at least an hour, don't use the elevator. Should you turn your back, answer the voice, or turn back to press the button, something will happen to you. Nobody know what will happen actually, but one thing is certain: you disappear..."
- Wow, so typical. I think I've heard something like this before.
- You're such a non-believer, Chise...
(A door opens)
- Hey, that reminds me. Aren't we on the 4th floor?
- Shoot, hurry Chise. Let's turn back...
- (Strange male voice)Hello ladies. What're you doing here?
- Hey, calm down. This guy is from the 3rd room.
- Oh (turn back). Hi there. I thought it was the 4th room. Sorry.
- Why sorry? By the way, my name is Lyrr, nice to meet you two.
- Nice to meet you.
- Nice to meet you too. Oh and, do you know something about the 4th room?
- The room next to mine? Ah, yes. Many say it's strange, but I don't see anything odd...
- Is that so... Oh, we have to go now, see you.
- Good bye.
- See you next time. (Whisper)Saito Chise...
- Huh? What was that?
- No, nothing.(Lyrr go back to his room)
(The two girls walk to the elevator)
- What a relief, right Chise? Turn out the story was fake.
- U-uhmm...(How did he know my name?... Oh well. Guess he overheard our conversation...)
(-Saito Chise... Another... to my collection...heheheheh...)

Lyrr chooses the way of a sniper and an assassin. He always avoids direct combat, as much as possible. Normally, he hide in dark places, far away from the front line, supports the team from distance and contact others via radio. (The reason he adopts this style will be further explained in near future.)

Ken: sir, here's your package you ordered :) Lyrr: Thanks. Now I quite see why they let us edit each other...

Ken: yep, looks much better. btw its not even half of the month yet, but have clean your house, gotta praise your spirit for new year :D

Arthur:'He who *** the god bare-handed'.... Is this the best way to describe someone??? Lyrr: Truly sorry. I wrote that after I read the first chapter. Now as the story progresses, I have different things to write of you. (^.^)

Arthur:Oh Ok then. Gonna be listening to music then (d-_-b)

Arthur:It's me again Lyrr. You really want to know how Ophelia looks like right??? I think if I have spare time, I'll do her character template so you'll know how she looks like(although I don't know how Baluar does his right, and I'm still learning. Maybe I'll ask him how he does it cuz it's gonna be a long story for my characters).

Retrieved from "https://godeater.fandom.com/wiki/User:Lyrr_Balriel?oldid=73245"
Community content is available under CC-BY-SA unless otherwise noted.