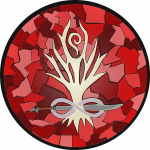 I got my hands on Gods Eater Burst years ago and loved the game. I started the game at the same time a friend did, so we hunted together when we got the time. It was our 'PSP-only' time, with most of the games being in the vein of the Monster Hunter style.

Among them were Lord of Arcana, Lord of Apocalypse, Monster Hunter (3rd and Freedom Unite), Phantasy Star Portable 2 (and Infinity).

I managed to get both God Eater 2 Rage Burst and Resurrection. Sadly, i won't be able to play as much as i want...

If you really want to waste your time, here are the fanfics i wrote back in the day.

I'm thinking about deleting all this to start anew. At the very least, i will write something better in the future.

My collection of screenshots from GEB

Baluar: Welcome to the Wiki Warden-Cypher! How should we call you?

Warden-Cypher: Depends. My male character in GeB is called Skyreaper. You can choose between this and my Wikia username, as you wish.

Bal: Ok, I'll see. By the way, don't feel weird if all the wiki is over you a while, its just that we're a rather small comunity, and people in small comunities tend to get their heads in other people's business :P If it bothers you in any way, no worries, it will be over shortly.

Arthur: Hm... I've been thinking about adding your characters as cameo apperances into my fanfics. Do you want to? It's ok if you say no. Tell me when you feel like it at my message wall.

Retrieved from "https://godeater.fandom.com/wiki/User:Warden-Cypher?oldid=84522"
Community content is available under CC-BY-SA unless otherwise noted.